I-Valo is an expert in lighting solutions.

Our principal philosophy is that challenges are there to be overcome. Our expertise in the lighting sector spans nearly five decades, which has put us in the forefront of the industry. Whatever the problem, we can offer a solution tailored precisely to your needs.

We wouldn’t be here without our customers and their lighting needs.

Designing lighting to match the space

Our lighting solutions are designed and laid out based on the individual properties and characteristics of the space.

Well-recognised around the globe

Our international customer base spans the globe.

We employ the latest innovations in lighting technology and use only suppliers with a reputation for quality.

We have nearly 50 years of experience in industrial lighting.

Our turnover amounts to approximately EUR 9 million (as of 2018).

We have customers in more than 40 different countries.

We have 40 highly skilled professionals in our payroll (as of 2020).

Where did it all start?

Almost all glassworks across Finland produce oil lamp chimneys and shades through glassblowing.

P. M. Abrahamsson, a Swedish-born glassblower, opens a glass factory in the small village of Iittala, formerly of the municipality of Kalvola. 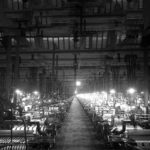 Incandescent light bulbs are first used in the Finlayson cotton mill in Tampere, a bustling factory town in Southern Finland. 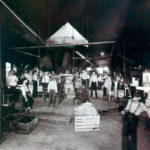 The first 60 light bulbs provide lighting for the factory’s smoothing room and office. The workers in the blowing house continue to work by the light from the furnace and the molten glass.

The end of the 19th century

The first batches of lighting glassware are imported to Finland.

Claes Nordstedt, son of Anders Nordstedt and both factory manager and majority shareholder of the Iittala glass factory since 1897, sells off his company shares to A. Ahlström Group.

The Iittala glass factory starts producing lamp globes. Even though almost all Finnish glassworks have their own globe models in stock, Finland continues to rely on imported products.

Erkki Hyppönen comes up with a national standard for threaded-lip light fixture globes.

The Iittala glass factory hires Designer Valto “Vate” Kokko (b. 26 May 1933, d. 25 May 2017 in Helsinki). Kokko is tasked with designing new proprietary luminaires for Iittala as well as trimming out and modernising the company’s existing luminaire selection. Kokko designs a brand identity for the selection and comes up with the I-Valo logo.

The Iittala glass factory luminaire selection needed its own brand identity and logo. As the company’s glassware was already known as i-lasi, “i-glass”, Kokko decided to call the luminaires i-VALO, “i-LIGHT”. The existing logo, which was used for the company’s glassware, consisted of the letter ‘i’ printed on a red circle, whereas the new logo for the luminaire selection would consist of a white ‘i’ printed on a blue square. Not only would this name be used as a company trademark, but also as the name of Iittala’s luminaire factory and, later on, as the name of the independent company I-Valo Oy.

The I-Valo luminaire factory is completed

I-Valo is managed as a department of the Iittala glass factory. Håkan Söderström, M.Sc. (Tech.), serves as the plant’s property manager before being promoted to Factory Manager. Paavo Paajanen, B.Eng, serves as I-Valo’s product manager.

I-Valo started looking into the problem of reliable industrial lighting with various individuals who had deep understanding of the subject. The general consensus was that nobody was making a luminaire that would be suitable for harsh industrial conditions. Reliable lighting was a challenge, especially due to:

As this was a problem shared across all industrial facilities, industry representatives were more than willing to work on a common solution.

In 1975, I-Valo received their first order for industrial luminaires from what was then known as Rautaruukki Oy. The order consisted of 250 vertical highbay luminaires with 400 W high-pressure sodium lamps, which would provide light for the company’s steelworks in the town of Raahe. Naturally, the luminaires were equipped with filters and rated for +100 ᵒC momentary and +80 ᵒC continuous ambient temperature.

In addition to metal industry operators, customers in the forestry industry, especially the pulp and paper sector, had embraced I-Valo’s offering.

The last three years of the decade were a time of booming construction in the paper industry. During this time, as many as 22 paper machines were either constructed or renovated. Four of the machines were equipped with I-Valo’s vertical luminaires and the rest with the company’s Regular-type highbay luminaires. It was soon apparent that no paper machine construction or renovation would be complete without I-Valo’s luminaires providing the lighting for the production hall.

I-Valo makes its first deliveries to customers outside Finland. The company’s excellent standing among Finnish paper mills drives export sales, as Finnish-owned paper mills in England and France invest in I-Valo’s industrial luminaires. This success can be largely attributed to excellent contacts in the home market.

As part of an internal reorganisation of the Ahlström group, I-Valo becomes part of the group’s construction materials division.

I-Valo procures its globes from the Iittala glass factory; some of the globes are made in house and the rest are imported.

Later in the same year, I-Valo participates in the BATIMAT construction fair held in Paris and is awarded the gold medal for the best innovation in the lighting category. The selection is made from approximately 3,500 exhibitors from 28 different countries. The silver goes to lighting industry giant Philips.

Paavo Paajanen is appointed Factory Manager at the group’s luminaire factory. Paajanen heads I-Valo for a very long time before finally retiring in 2005. 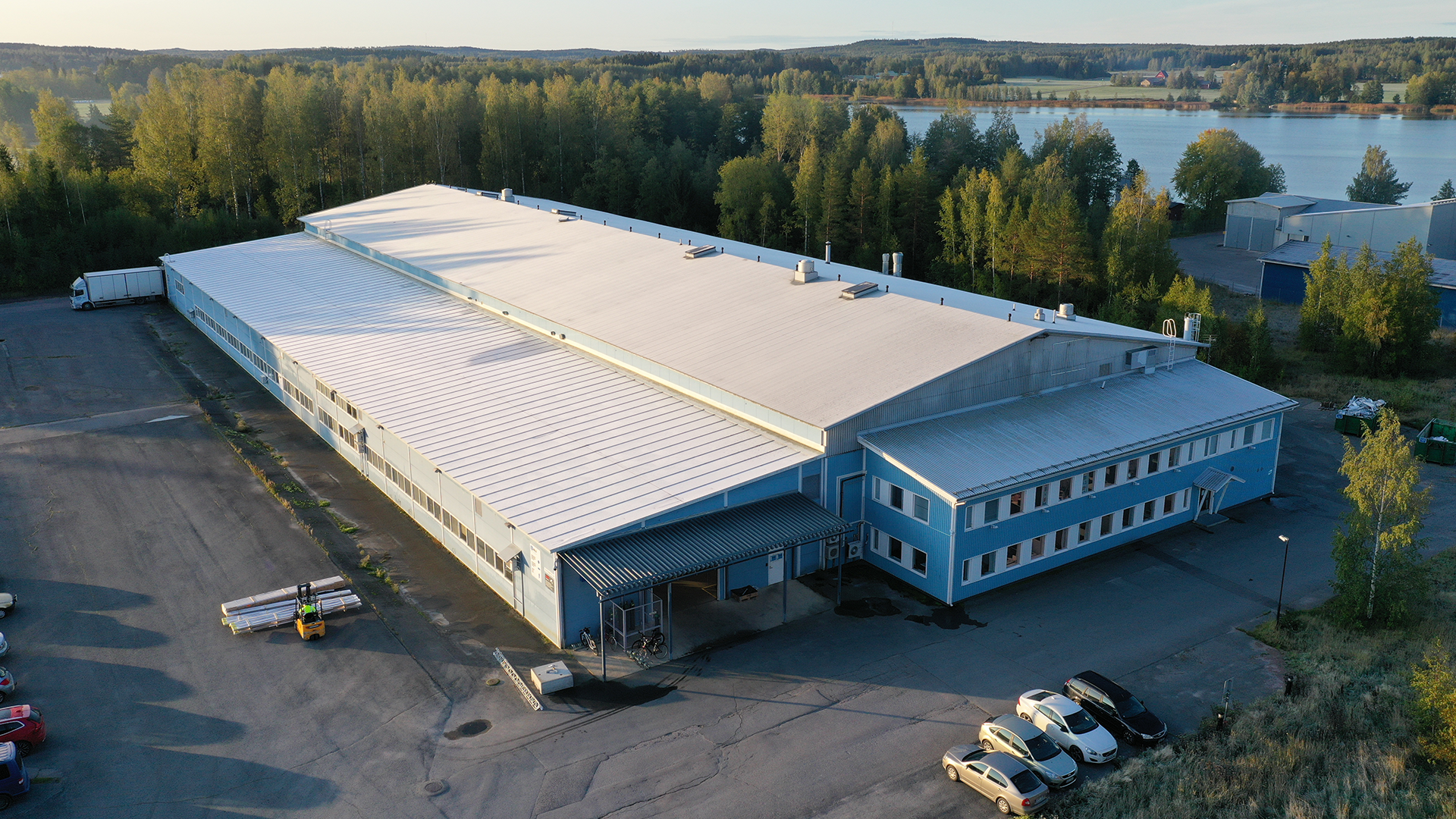 The late 70s and early 80s were a period of extensive growth for I-Valo. The production halls, which had originally felt cavernous, were filled to the brim with new machines and equipment. Despite production streamlining, the company was looking forward to a factory expansion. Production floor space was increased by 50 per cent, and the company constructed two new floors for additional office space.

The 90s saw a substantial decrease in industrial construction, especially in the Finnish paper industry. A moderate number of new paper machines was built as late as 1990, but after this, the numbers dwindled to one per year or less. Finland was hit hard by the recession in the 90s, but its effects were felt everywhere, Central Europe being no exception. However, I-Valo had started exploring new markets already in the 80s, and these efforts were now bearing fruit. For instance, exports to France and especially the French metal industry were now in full swing. Additionally, several new paper mills were built in Germany, netting I-Valo contracts for luminaires utilising the company’s proprietary filtering technique. The company had also been building a solid presence in Austria since the late 80s. From 1996 onwards, I-Valo’s export sales have surpassed the company’s domestic sales.

In 1994, Ahlström Sähkötarvikkeet Oy is founded, serving as an umbrella for several companies, including the group’s Strömfors factory and I-Valo. The new company is headed by Johan Granberg as managing director. Paavo Paajanen is appointed as I-Valo’s Factory Manager.

Lexel is created by merger between Ahlström and NKT, a Danish company. The new group is further bolstered by the acquisition of Sweden-based Thorsman.

Being a Lexel Electric subsidiary, I-Valo becomes part of the Schneider group, originally a French company.

I-Valo becomes I-Valo Oy, an independent company within the group

I-Valo launches SOL LED, the company’s first LED luminaire. SOL LED is a general purpose luminaire intended for residential homes and public spaces. The luminaire is selected as the 2010 construction product of the year by the principal committee of the construction material and product information service of the Building Information Group. SOL LED is still available and, thanks to its modular construction, remains a popular option to this day. 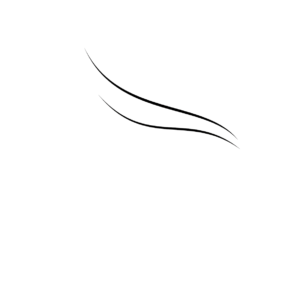 The FIT FOR THE FUTURE -concept: pioneering sustainable development

The general purpose Sol LED luminaire was also designed to be upgradeable by swapping out LED modules. These solutions allow customers with legacy hardware to upgrade their existing luminaires cost-efficiently to utilise the latest in LED technology, avoiding the need to invest in new luminaires. Correspondingly, the company’s new LED luminaires allow users to “change the bulb” by swapping out the original hardware package with the latest upgrade kit.

With subsidiaries in 30 countries around the world, Fagerhult is one of the leading groups in the European lighting sector. The company has a presence in more than 40 different countries. Fagerhult has been in the lighting business since 1945.

I-Valo has customers in more than 40 different countries, its largest exports markets being Sweden, France, Germany, Austria and Poland. Additionally, the company has participated in major projects in Asia and South America by supplying luminaires to equipment manufacturers and made deliveries to the Middle East as part of intra-group co-operation.