The history of I-Valo’s industrial luminaires

Designed and developed in co-operation with customers

In 1973, I-Valo started talks with industry representatives and other individuals who had deep understanding of industrial lighting. The general consensus was that nobody was making a luminaire that would be suitable for harsh industrial conditions.

Designing reliable industrial lighting was challenging, especially due to:
• dust particles and other impurities in the air,
• corrosion,
• unusual ambient temperatures, and
• mechanical damage.

Each of these factors increased the need for servicing and repairs and, consequently, the associated operating costs. This problem was compounded by the fact that luminaires were often positioned very high up or in otherwise difficult locations. As this was a problem shared by everyone, industry representatives were more than willing to work on a common solution.

Among those who brought their expertise on board were the Varkaus mill’s head of electrical engineering and a lighting specialist from the steelworks operated by Rautaruukki (currently part of SSAB). Additionally, the Finnish Forest Industries Federation and Kemira, a major chemical industry group operating in Finland, participated in the meetings already at a very early stage, bringing out the lighting problems specific to their own fields.

Also, I-Valo invited Airam, a well-known Finnish light bulb manufacturer, and ballast supplier Helvar to the table. Another key negotiation partner was the now-defunct Electrical inspectorate, which sent its own representative to the meetings. By consulting these experts and organisations, I-Valo was able to boil down the problems to specific issues, which could then be tackled together.

From the outset, it was clear that the solution would not be cheap. This was, however, beside the point, since it was now possible to develop a luminaire that would actually function properly and serve its purpose in an industrial context. 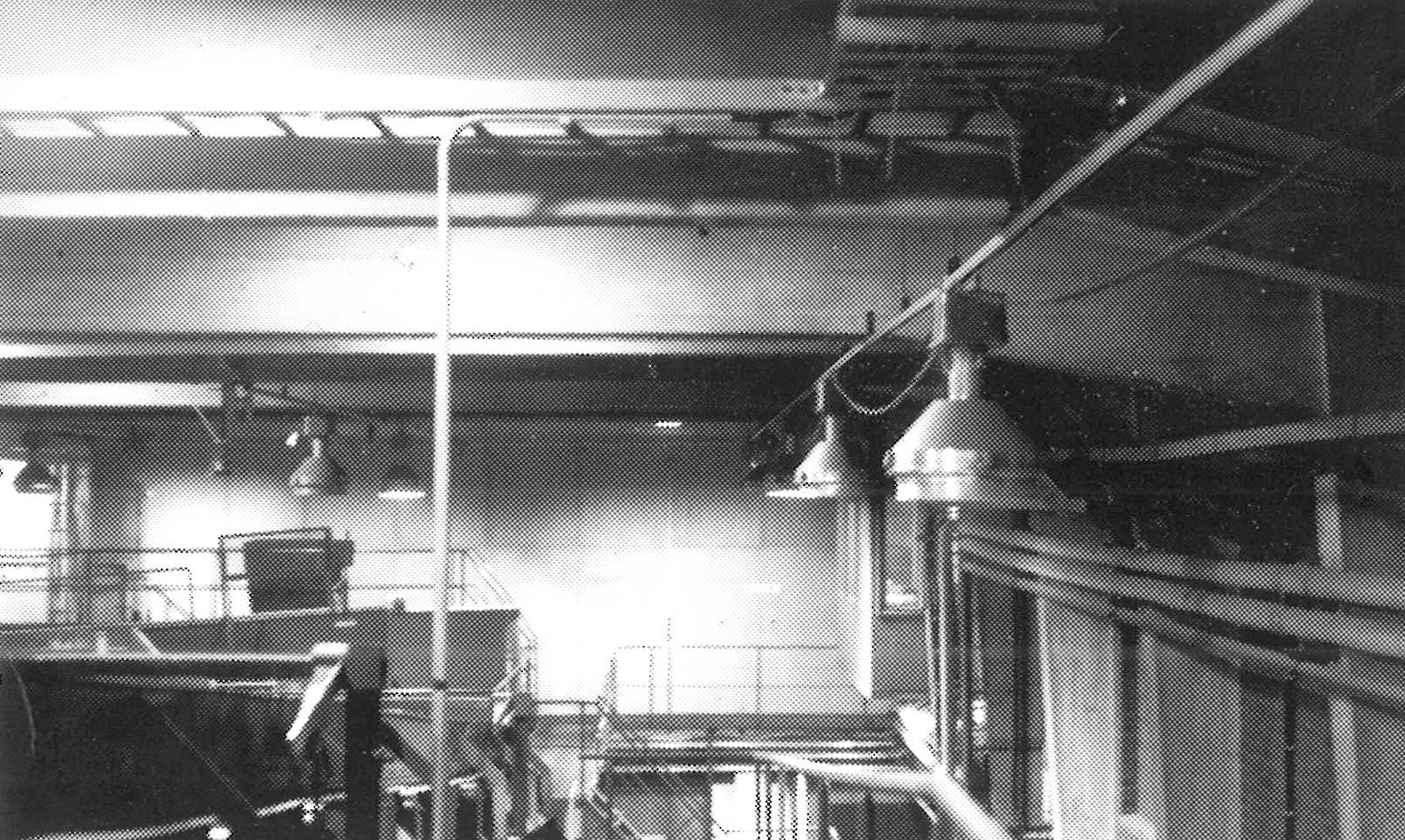 Tests performed on the roof of one of Rautaruukki’s blast furnaces revealed that it was impossible to make a luminaire that would not suck in dirty air through an invisible opening somewhere. It would be better to equip the luminaire with a filter and allow it to breather freely. The Iittala glass factory happened to have a suitable Kemira-made filter in stock, and the rest is history. I-Valo decided to patent this invention both in Finland and abroad. In the end, the solution was patented in 12 different countries.

I-Valo’s first industrial luminaire, named as Super in Finnish market, was a robust, epoxied model made of aluminium. The unit was enclosed and sealed off with a dust rim and equipped with a dust and gas filter. Available in vertical and horizontal configurations, the luminaire could withstand even high temperatures. The vertical model was gradually phased out, whereas the more practical horizontal model established its position as the top-of-the-line option in I-Valo’s luminaire selection. In addition to Super, the company developed a wide range of luminaires for different applications and less demanding conditions.

The first test batch was “test-fired” at the company’s glass factory. The factory’s repair shop received a dozen or so new luminaires and the blowing house two or three. One of the luminaires was placed above the glass furnace, providing valuable information on the luminaire’s heat resistance. The first test batch was made by sand casting. The actual production units were spin-formed, and the required ballast boxes were die-cast.

The luminaires originally “test-fired” at the glass factory are still in use. At the end of 2005, I-Valo asked whether the factory would be willing to part with the unit placed above the glass furnace for further studies. The luminaire had survived largely intact, except for the seals, which had been fried to a crisp after spending 30 years in the heat of the furnace. The rest of the luminaires remain in their original positions. 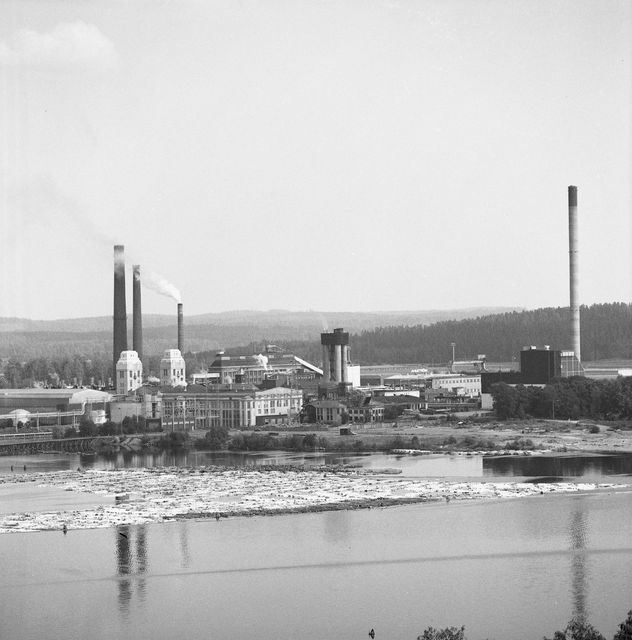 Additionally, Savolainen obtained the approval of Rautaruukki’s management for I-Valo’s renovation plan, according to which the steelworks’s existing 700-watt luminaires with mercury-vapour lamps would be decommissioned and every other luminaire would be replaced with 400-watt high-pressure sodium luminaires. In terms of power, this would mean replacing 1,400-watt units with 400-watt luminaires. I-Valo’s sales manager promised that this would not compromise light levels on the floor, and that Rautaruukki would recoup the investment in three years. Ten years later, the steelworks’s factory manager would meet the sales manager and give praise to the solution, stating that he would have never guessed that such promises would become reality.

By the end of the first year, more than 2,000 luminaires had been ordered from I-Valo. The bulk of the luminaires were delivered to the manufacturers who participated in the development, especially to Rautaruukki’s steelworks and Ahlström’s mills in Varkaus.

This trend continued the next year with Rautaruukki’s expansion of its Raahe steelworks blast furnace and the commissioning of a new paper machine, PK4, at Ahlström’s Varkaus mill. Additionally, hundreds of new luminaires were delivered to Rautaruukki’s Hämeenlinna and Oulainen steelworks. All in all, this was a very promising start.

It soon became apparent that involving end users in the development process had been an excellent way to engage companies to buy the luminaires, as procurement departments across Finland would regularly shake their heads over the prices. I-Valo had managed to help those responsible for plant illumination to see the benefits of luminaires equipped with filters over the cheaper alternatives offered by the competition. Thanks to the success of this strategy, the company decided to use this approach with new customers as well. 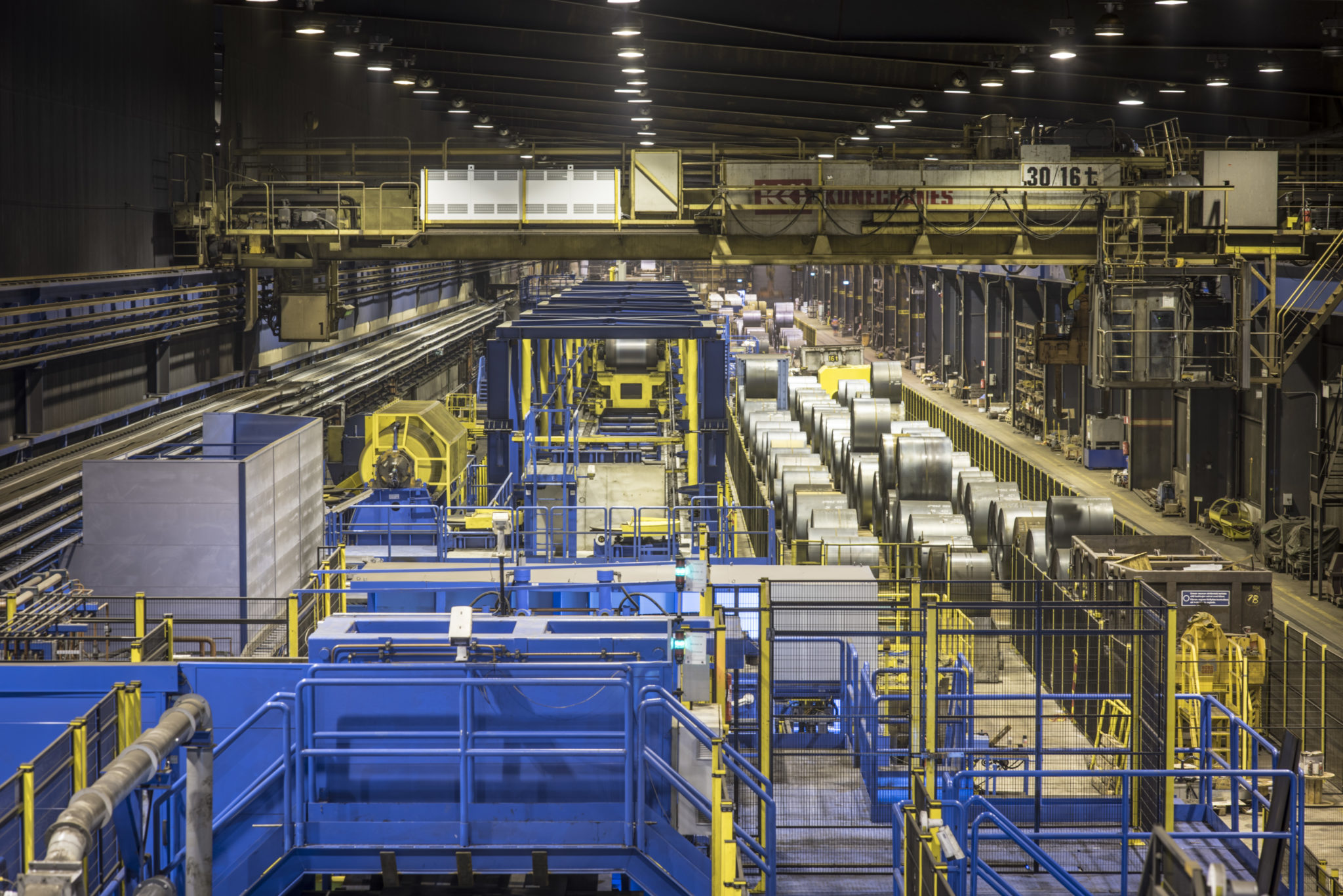 From the very beginning, it was clear that seeking new markets for the company’s industrial luminaires from abroad would be worth the effort. Industrial operators all over the world faced the same problems. Due to high shipping costs, it would be wise to focus on nearby markets. Additionally, the European countries furthest away from Finland employed a greater variety of grid voltages and frequencies.

In Finland, I-Valo had received the necessary approvals fairly easily thanks to involving the Electrical inspectorate from the start and, consequently, receiving first-hand knowledge of the requirements. Sweden was also familiar ground thanks to previous dealings with SEMKO, the body responsible for light fixture approval in Sweden. To be able to start exporting products to Central Europe, the company have their products certified by the German VDE (Verband der Elektrotechnik, Elektronik und Informationstechnik). Without this, no one would be willing to trade. Among Finnish companies, VDE was known to be a tough nut: the organisation’s requirements were quite different from those in Finland, and their certification policy was extremely strict. Sometimes obtaining certification would feel like splitting hairs, but in the end, the required attention to detail gave I-Valo a substantial advantage. Being able to demonstrate compliance with VDE requirements would help I-Valo to earn the trust of potential customers in Central European markets.

When the first personal computers started to hit the market, I-Valo leaped at the opportunity and adopted its first lighting calculation program, a DOS-based solution developed by the Finnish State Institute for Technical Research. The software produced printouts more than a metre long and filled with numbers. With a bit of practice, these strips of paper could be highly informative, as the data was based on actual readings from luminaires.

Since then, lighting calculation programs have evolved with advances in computer technology. Today, thanks to 3D modelling, the printouts are extremely clear and accurate and, consequently, an excellent tool for demonstrating how the customer’s cash can be best transformed into lux. 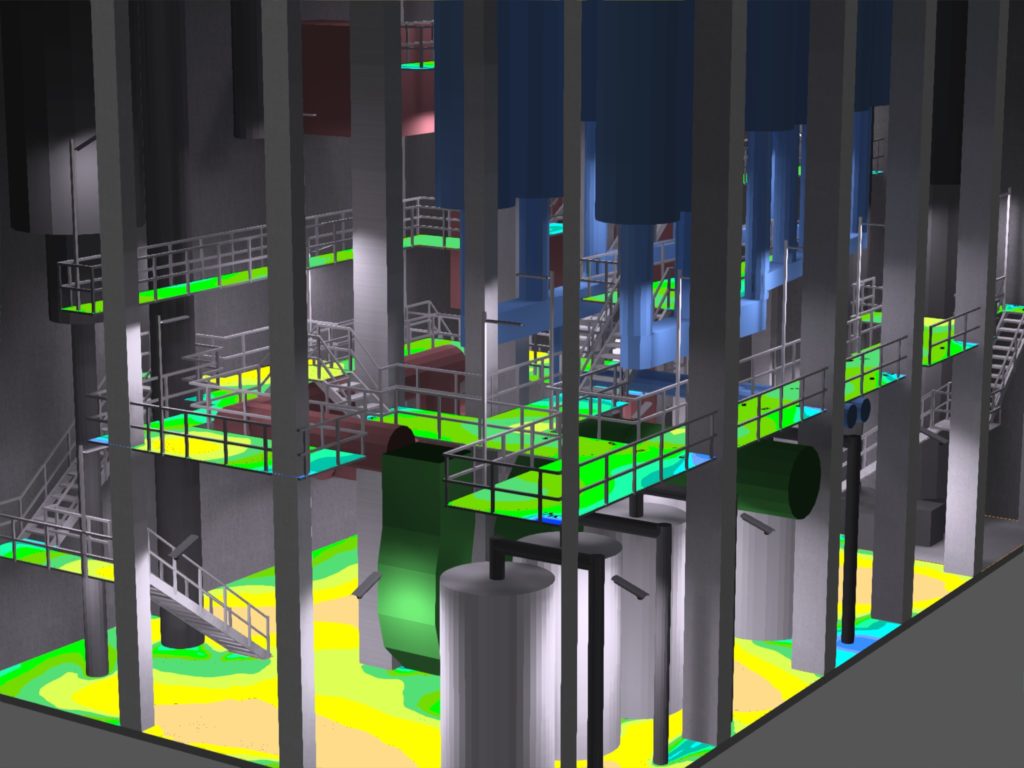 Today, people are increasingly worried about their carbon footprint and climate change in general, prompting companies to design more energy-efficient and long-lasting products and solutions with reduced lifecycle costs. This ideal has been the cornerstone of I-Valo’s design philosophy since the company’s establishment. Leafing through the company’s luminaire catalogues from as far back as the early 80s will reveal energy saving calculations comparing I-Valo luminaires equipped with filters with the cheaper open fixtures available on the market at the time. Competing products may have a cheaper purchase price, but in the end, I-Valo luminaires typically win out thanks to their substantially lower lifecycle costs.

These values and principles still serve as the foundation for I-Valo’s business. Advances in LED technology have revolutionised the entire industry, bringing new opportunities for saving energy. We at I-Valo work hard to supply our industrial customers with enduring, high-quality LED solutions that truly work regardless of the circumstances. 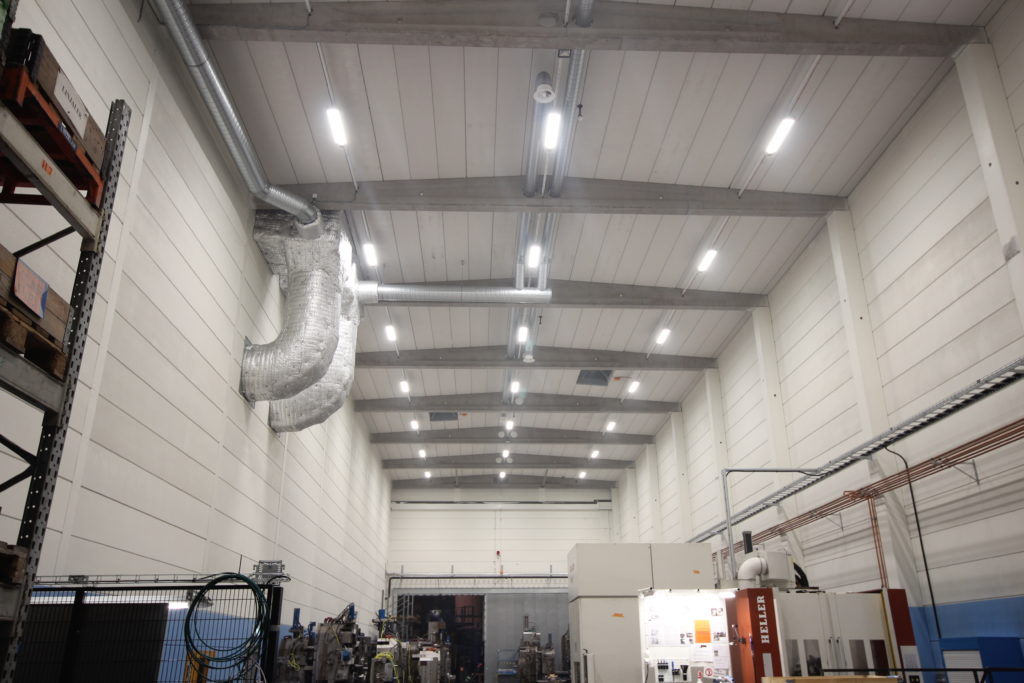